Can be used with – Arturia: Beatstep Pro, DrumBrute & Keystep 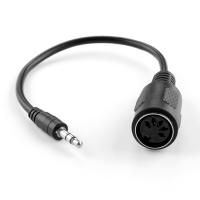 In the past few years, MIDI hardware products have become smaller and smaller. This has caused some issues as the 5 pin DIN connector is pretty big.

Many products make now use of a stereo jack connector, which make use of a breakout cable to the standard 5 Pin DIN connector.

Some of the classic drum machines and synthesizers we love to dig up today don’t have MIDI to keep them in time. Back in the 1980’s, Roland came up with a synchronization format for their growing range of machines called SYNC24. It runs on the familiar 5 pin DIN cable (and is also known as DIN SYNC) that was adopted by MIDI later on, but the two formats are not compatible.

Can be used with – Arturia:

This cable is the same cable as the clock adapter cable of Anturia:

This type of MIDI Breakout cable is compatible with:

There are no reviews yet.

By continuing to use the site, you agree to the use of cookies. more information